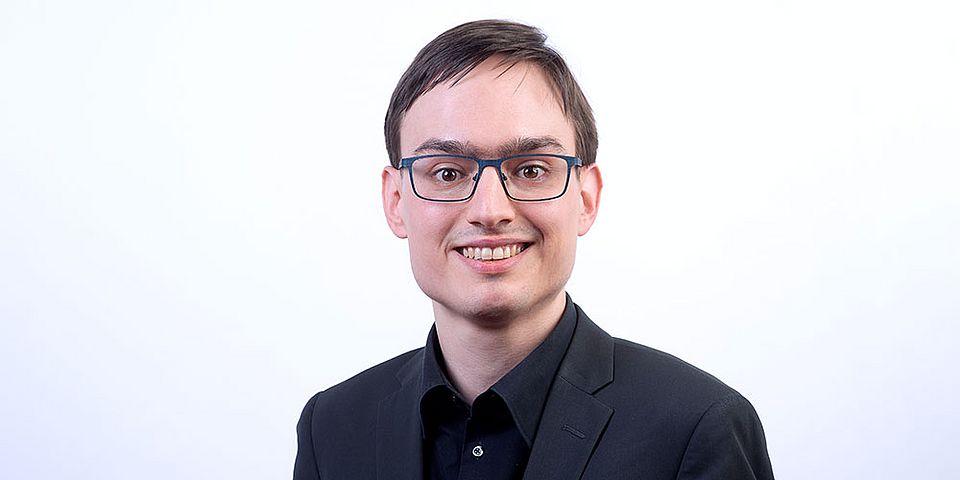 For the Matura, he wrote a satire on Berlusconi – in Latin. And for his dissertation, which was awarded the Prix Schläfli, he chose a field that is rather exotic even for insiders: Diophantine geometry. Gabriel Dill likes it a little complicated.

Anyone, who devours Ulysses in his or her spare time, raves about the "magic" of mathematical equations, and spends years solving problems that 99.9% of the population is not even aware exist – yes, such a person must face the question: "Are you a nerd?" Gabriel Dill takes his time to respond, searching for words to respond seriously and adequately. "I can get very excited about abstract questions, get into topics that are far removed from reality," he says finally. However, the term "nerd" is somewhat clichéd.

Mathematics is something social

On the contrary, "Mathematics is something very social," Dill points out. "You are constantly exchanging ideas with other people." For example, in the "Bernoulli's Round Table", which he co-organised: a platform for doctoral students to give talks to each other about their areas of expertise. "It makes you think outside the box," Dill says. Even though this round table naturally constitutes like-minded people, who, like Dill, like to puzzle, "brainstorm", pose and solve problems that do not tend to arise in real life.

Gabriel Dill also addressed such a problem in his dissertation at the Number Theory Research Group of Prof. Philipp Habegger at the University of Basel. It is about a subfield of number theory called "Diophantine geometry". Diophantus of Alexandria was a mathematician of ancient times and is considered one of the founders of algebra and number theory. The "Diophantine equations", for which one searches for special (for example, integer) solutions, are named after him. One question might be: which integers are areas of right triangles with rational side lengths? In turn, "Diophantine geometry" uses the geometry of objects defined by Diophantine equations to solve the equations. A famous supposition that has so far been only partially proved establishes a connection between geometry and arithmetic. Dill proved this supposition in certain special cases in his dissertation.

For the uninitiated, it is hard to understand the world. For the initiated, on the other hand, it is clear: Dill's dissertation is "ambitious, technically versatile and contains original ideas," writes the jury. "The award is a great joy for me," says the 27-year-old. "I am proud of my dissertation and felt I did a good job." To others, this might sound arrogant and smug. Not so with Gabriel Dill: In conversation, it becomes clear that he is not driven by a desire for recognition or competition. He is, so to speak, the prototype of an intrinsically motivated person.

Growing up in Basel with a brother 6 years younger, he discovered his penchant for intellectual challenges at an early age. In grammar school, he took Latin and Greek, following the footsteps of his parents. His matriculation project thesis was based on the model of Seneca's lampoon on Emperor Claudius. It was the time when Berlusconi made headlines with his "bunga bunga" excesses. A good opportunity for the high school graduate, who wrote his satire on the would-be Roman emperor bilingually in German and Latin. When he recalls it today, something flashes in Dill's eyes, and one senses what thieving pleasure this work must have given him.

Although it may seem today that Gabriel Dill lives only for the mathematical universe, there is also a world outside for him. He played the violin intensively until moving to Oxford, where he is doing postdoctoral research until next spring. He is a member of the Juso Basel, enjoys hiking and loves creative writing.

One may think of Gabriel Dill as a happy person. A kind of philosopher who has not forgotten childlike wonder. "Actually, mathematics is a language that understands and explains many natural phenomena," he explains, echoing the definition of mathematics as an "auxiliary science." But he goes on: "You can also just explore this language as a universe unto itself."

This text originally appeared on the website of the Swiss Academy of Sciences (SCNAT).