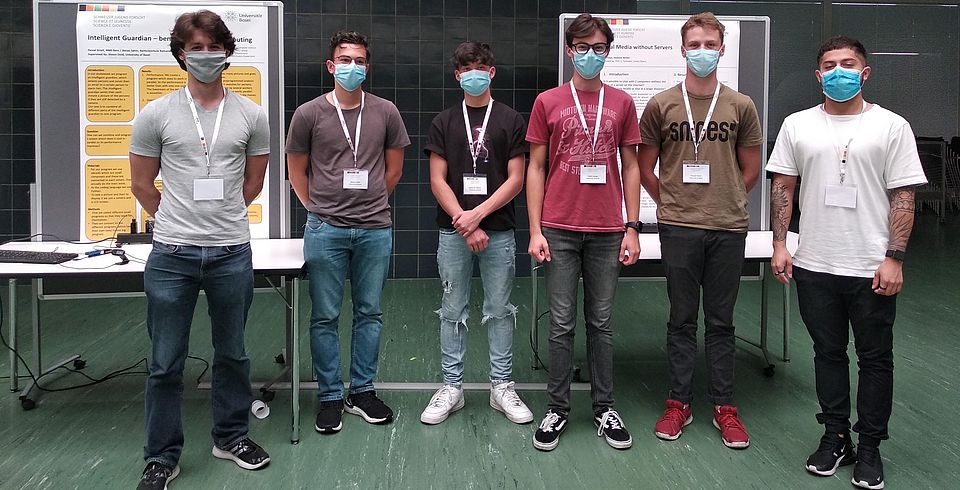 From September 6th to September 11th, the annual Fascinating Informatics Study Week took place. The program is offered annually by Schweizer Jugend Forscht for young people aged 16 to 20. In addition to the University of Bern, the FHNW Brugg-Windisch, the Università della Svizzera Italiana (USI), and the SBB, the Department of Mathematics and Computer Science of the University of Basel has also offered a program.

After registering successfully, the participants were divided into groups and assigned to the various institutions. This year, the Department of Mathematics and Computer Science welcomed Carlo Crespi, Domenik Müller, Pascal Streit, and Renas Sahin. After the first night in a youth hostel in Basel and a joint dinner, the participants got to work.

Pascal and Renas, who worked on the 'Intelligent Guardian' project, were supported by Prof. Florina Ciorba, tutor Simon Dold and Ph.D. student Ahmed Eleliemy. The project aimed to develop an early warning system that can distinguish people from objects and send a notification to a specified recipient as soon as a person is detected. Such a system could, for example, be used in someone's front yard to notify residents if a stranger is recognized there. An intelligent system that reliably distinguishes people from other objects and living beings can work in a targeted manner. Residents would be only notified if a stranger appeared in the front yard, but not if the neighbor's cat strolled around. To distribute the various tasks that the system has to perform as efficiently as possible, Pascal and Renas have made use of parallel processes. That means that different (sub) tasks are distributed in such a way that they can be processed at the same time. By deploying this intelligent system to the microcluster, these parallel processes were made visible.

Carlo and Domenik, who worked on the 'social media without servers' project, were supported by Prof. Christian Tschudin and tutor Carlos Tejera. The project aimed to create a chatroom in which one can communicate without the Internet and also determine the distances over which communication can be maintained. A simple user interface, consisting of an input field and a few buttons, was already given. Messages could be transmitted in this chatroom using LongFi. In the next step, Carlo and Domenik set up an antenna on the roof of the Department to communicate from the rooftop to their youth hostel. However, they were unable to overcome this distance for the time being.

After a week of intensive work, all 21 participants, who had worked on a total of 10 projects this year, came together in the FHNW Brugg-Windisch on Friday afternoon to present their projects and answer each other's questions.

And what's the personal conclusion? Pascal, Renas, Carlo, and Domenik would all recommend the study week to others, and some of them can also imagine studying computer science in the future.