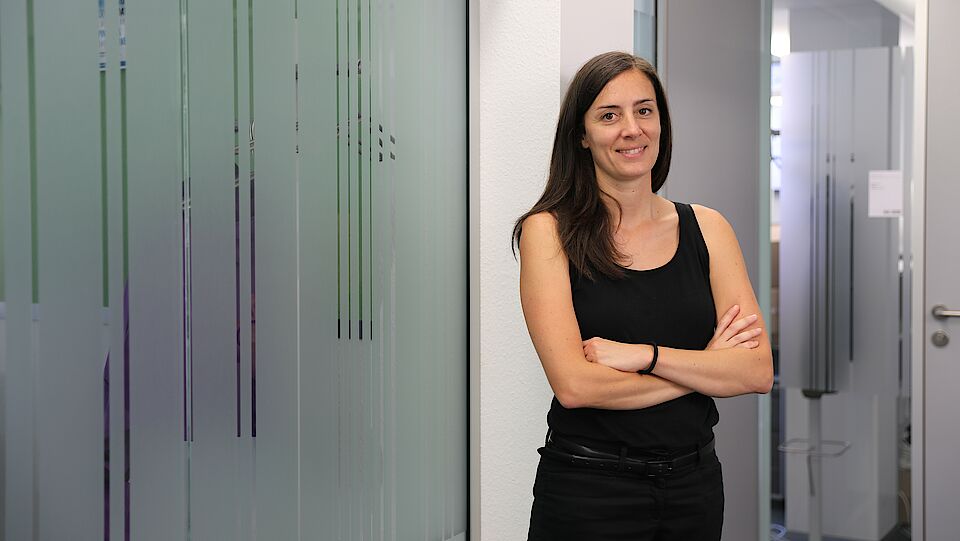 The European Research Council (ERC) has awarded Prof. Chiara Saffirio one of the coveted ERC Starting Grants. The mathematician will thus receive financial support of around €1.5 million for her research over the next five years.

Prof. Chiara Saffirio has been working as an assistant professor at the Department of Mathematics and Computer Science of the University of Basel since 2019. As head of the mathematical physics research group, she focuses on the derivation from many-body dynamics of the Boltzmann equation for rarefied gases, the Hartree-Fock equation for fermions, the Vlasov-Poisson equation for non-collisional plasmas and the Landau equation for collisional plasmas.

As part of the ERC project Advances in effective evolution equations for classical and quantum systems (AEQUA), Saffirio is addressing the question of how, within the framework of the kinetic theory of gases, rigorous derivation of effective macroscopic equations can be derived from microscopic laws of classical and quantum mechanics. "If you look at plasmas and gases at microscopic scale, you can see that they are made of a huge number of particles. In the transition from the microscopic to the macroscopic level, they appear to exhibit a collective behavior that can be described by simpler models called effective equations. I investigate in a rigorous way the step from the microscopic to the macroscopic description to detect the regimes of applicability of certain physical models."

Addressing the aforementioned question could contribute to the resolution of longstanding open problems, such as the emergence of irreversibility from microscopic time-reversible dynamics. "In many microscopic systems, you can go back and forth in time. This is no longer the case at the macroscopic scale where we experience the emergence of the so-called arrow of time." Furthermore, addressing this question will lead to the development of innovative mathematical methods originating from bridging different branches of mathematical physics and analysis, namely classical and quantum many-body systems, kinetic theories, and PDEs.

The search for reduction of complexity in highly complex systems

In her everyday life, Saffirio often feels reminded of her research: “If you take, for example, the formation of political opinions in the run-up to an election, you look at an entire nation of voters - millions of people, informing themselves, talking to each other, reevaluating their opinions and so on. Basically, this is a highly complex system – I can trace back the interaction between two people but looking at the entire population at the macroscopic level, I can no longer unravel who spoke to whom, when an interaction took place and what impact it had." Macroscopic effective equations approximating in some sense these complex systems are the key to understand these phenomena and make predictions that turn out to be useful for applications. The same applies to market research or the prediction of disease progression. The search for reduction of complexity in highly complex systems is neither new nor rare. "Of course, these are simply some practical examples that I don't actively work on as a researcher, but they show some of the many reference points between mathematics and our day-to-day lives." The methods developed within the framework of AEQUA will offer a new perspective on the derivation of kinetic equations with special focus on the derivation of the Boltzmann equation. They have long been of great importance for mathematics, theoretical physics, and the philosophy of science and have served as prototype models for applications, not only in physics, but also in biology, economy and social sciences.