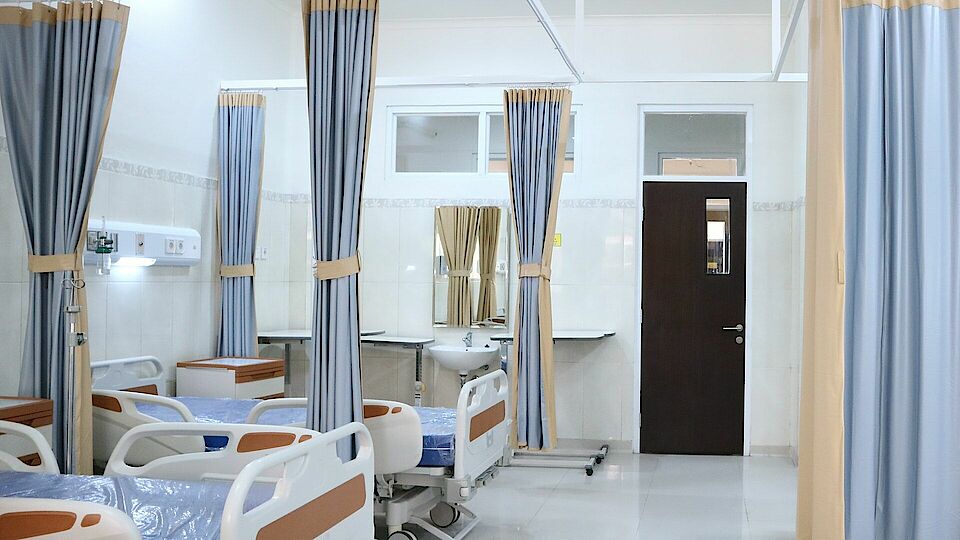 As shown in a new study by the University of Basel, individual empty beds do not necessarily mean a smaller burden on nursing staff. (Photo: Gorden Murah Surabaya/Pexels)

Researchers have long suspected a link between bed occupancy and mortality in hospitals. Now, a study by the University of Basel has provided the missing data, revealing that smaller hospitals reach their capacity limit much earlier.

Since the outbreak of the coronavirus pandemic, if not before, we’ve got used to seeing figures relating to bed occupancy in Swiss hospitals in media reports. You might think that as long as there are free beds, there’s no problem. Now, a University of Basel study led by Professor Michael Simon has shown that, in some cases, the mortality rate in hospitals rises significantly before full capacity is reached.

For the study, the researchers analyzed data from over 1.1 million inpatient cases at 102 Swiss hospitals in order to investigate the relationship between bed occupancy and the 14-day mortality rate in hospitals. In other words, the cases were observed until the 14-day mark unless they were discharged earlier.

The relationship between bed occupancy and mortality is a complex one. In addition to the occupancy of beds, it is important to consider other factors such as patient transfers in the individual hospitals, the average severity of the cases admitted to the hospital on the respective day, and the patients’ individual risk of dying. Further variables include comorbidities and the age and gender of patients. Account was also taken of the difference between weekdays and weekends and the type of hospital.

The threshold of capacity utilization above which the mortality risk increases is different in each hospital. If a patient is exposed to the bed occupancy above this value, the risk of death increases by around 2% per day. In the event of two or three additional days with excessive capacity utilization, there is a 3.2% or 4.9% increase, respectively, in the probability of 14-day mortality at the hospital. The threshold for the individual facilities ranged between 42.1% and 95.9% bed occupancy.

These considerable differences have a decisive impact on the threshold: the higher the average bed occupancy at a hospital, the higher the threshold. In the case of small hospitals, the average occupancy is around 60%, while this figure rises to 90% at large hospitals. With a lower average occupancy, larger variations can occur – and these variations in bed occupancy result in a lower threshold for increased mortality. Accordingly, this threshold is also reached more quickly.

The reasons for rising mortality in the event of higher occupancy include the fact that certain treatments can no longer be performed or are delayed. Moreover, the number of physicians and nursing staff remains relatively stable despite these wide variations.

According to Simon, the problem can be addressed by reducing the variations in occupancy and ensuring that the hospitals are adequately staffed. Above all, he believes the solution lies at the political level: “It’s difficult to operate lots of small units efficiently. Pooling hospitals or ensuring closer collaboration between them leads to less variation and therefore less risk.”