Philipp Habegger at the International Congress of Mathematicians 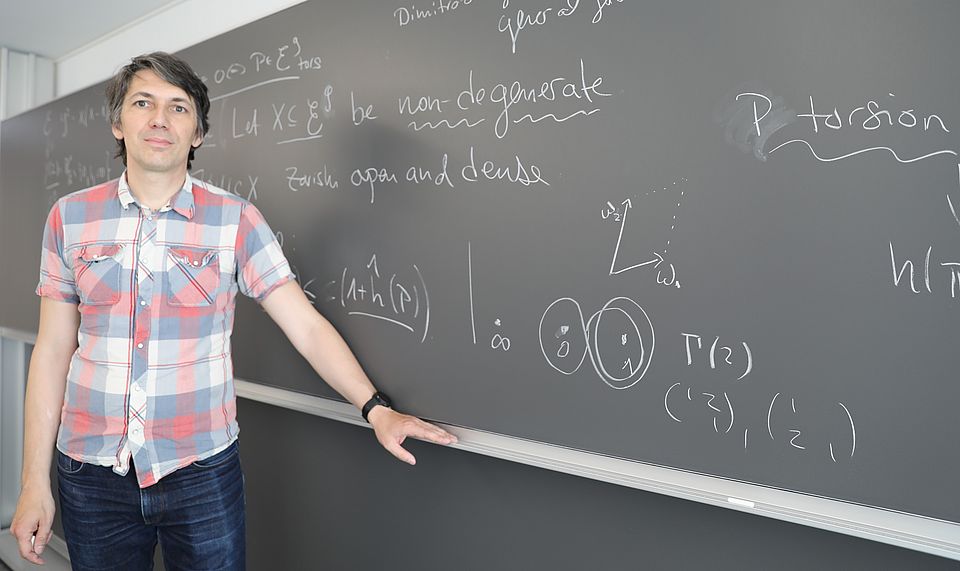 © Department of Mathematics and Computer Science

The International Congress of Mathematicians (ICM) takes place every four years. As well as the awarding of the Fields Medal, the highest honor in mathematics, it features specialist lectures from the world’s most renowned mathematicians. This year's ICM will be held from July 6 to July 14 as a fully virtual event.

Prof. Philipp Habegger, head of the research group on number theory at the Department of Mathematics and Computer Science, has been invited to give a lecture at the ICM 2022. His invitation is an expression of the esteem in which his achievements in the field of diophantine geometry are held among the international mathematics community. It honors his breakthrough research in height theory, which operates at the interface of algebraic geometry and number theory and studies the complexity of objects from algebraic geometry. For example, 2/3 is a less complex point than 163/243.

After completing his doctorate at the University of Basel, Philipp Habegger worked as a postdoctoral researcher at ETH in Zurich, where he proved a then-unproven hypothesis by Enrico Bombieri, Umberto Zannier, and his doctoral supervisor, David Masser, in 2009. Based on this result, he then introduced innovative methods based on complex techniques from algebraic geometry into the study of heights. In 2013, he expanded these to produce the first version of the result still known as the Höhenungleichung (‘height inequation’) among experts. His findings showed a deep relationship between the complexity of points in the parameter space of Abelian varieties and the complexity of group theory objects, thus generalizing earlier works from the 1980s by Joseph Silverman of Brown University. Abelian varieties are named after the Norwegian mathematician Niels Henrik Abel and are relevant to various fields of mathematics and theoretical physics. Having returned to Basel as a professor, Habegger continued to develop his ideas together with his co-authors, ultimately proving a uniform version of the Mordell conjecture. The Mordell conjecture represents a central connection between number theory and geometry and was first proven by Gerd Faltings in 1983, who received the Fields Medal for his work.

Habegger’s research has been highly influential internationally as well as within the University of Basel. Lars Kühne, who was an Ambizione fellow in Basel until 2020, combined the Höhenungleichung with concepts from the theory of uniform distribution in 2021 in order to prove a then-unsolved conjecture by Barry Mazur of Harvard University. Another version of the Mazur conjecture was proven in a positive-characteristic setting by Robert Wilms, today a postdoctoral researcher at the University of Basel.

Philipp Habegger will give his lecture at the ICM on July 9 in slot 9b. He will also speak at a satellite event at ETH Zurich on July 12. Both events will be streamed online and/or published on YouTube afterwards.