The Number Theory Research Group works on the connections of number theory to geometry and analytic number theory. It is led by Prof. Habegger and Prof. Le Boudec.

One interesting question is how many points with integral or rational coordinates lie on a plane curve. Or can the sum of two cube numbers, such as 1, 8, 27, and so on, also be a cubic number? Such a problem can also be investigated with geometric tools.The group’s research especially focuses on elliptic curves. Using the construction of chords and tangents depicted on the right, two points can be “added” to a third point.
This “addition on the curve” connects geometry and arithmetic and is a powerful tool for studying elliptic curves. It plays an important role in applications in cryptography. 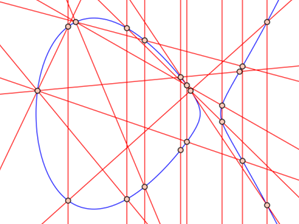